Does that Skull Make Her Look Fat? 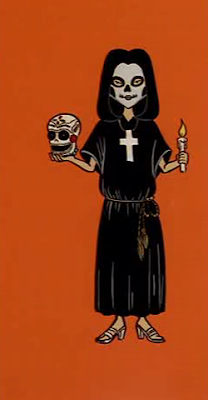 Tiffany's delving into the deep, dark mysteries of life for Occult Day, which is weird because usually there's nothing deep at all about Tiffany. Maybe she's trying to learn more about Stacy's voodoo curses?

Today is also the anniversary of the tragedy at Jonestown in 1978, an event referred to reverently, almost lovingly by Mr. DeMartino at the beginning of the episode "Pinch Sitter." Not sure if he was envious of the cult leader's ability to command respect or just longing for the sweet release of death.