She Don't Want No Scrubs 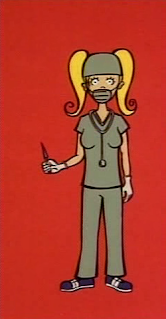 Brittany's scrubbed up and ready to perform surgery on Operating Room Nurse Day! Personally, I'll pass. Not that I have anything against her, personally, but I don't think I want to be cut open by anyone who doesn't know her right from her left.

Today is also World Diabetes Day, so watch that blood sugar and do not take Mr. O'Neill's advice about spoonfuls of sugar. Otherwise you might end up in the operating room with Nurse Brittany.