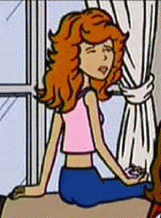 If you're wondering what the future holds for weather, you could always ask a large rodent his opinion because it's Groundhog Day and, why not? I've heard of weirder things, anyway.