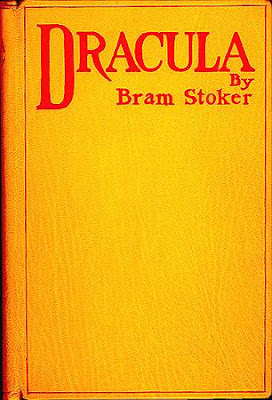 "Aunt Nauseam" the episode is eight years old today. One of the most interesting lines from that show, to me, was Quinn's recitation of Sandi Griffin's claim that "[I]f you want to get technical, all writing is plagiarism because you're using words that already exist." That was quite clever.

We also learn that Eric has apparently gone into detox for amphetamine addiction (again) and Amy Barksdale was not as cool as was earlier supposed. We learn that Jake knows something about Civil War cooking (American, not English or Russian or whatever), we learn the show's writers know how to continue a theme in a grand way (picking up from "I Don't"), and....

Wait a minute. Did Sandi Griffin actually type out the entire contents of Bram Stoker's novel, Dracula, and submit it to her teacher? Perhaps she downloaded it from the Internet instead, but that isn't what was said. In a way, this revelation is more interesting that the sororal battle of the Barksdales. Why did she pick Dracula, of all things? Did she actually read the entire book? Does she have a deep and true fixation with vampires, horror novels, Gothic novels, or something of that ilk? She talks about the novel as if it were important to her. Does Sandi have a secret... addiction to reading books? Intriguing.

There is a pun here, of course, involving the 1992 movie Bram Stoker's Dracula (the title of which Sandi was obviously imitating). Moreover, one of the alter egos used on the show has Sandi Griffin dressed and made up exactly like the Dracula of that particular movie. Talk about your running gags! See this link for the picture and details.

The connection between Sandi Griffin and vampirism has been explored in fanfiction, too, as noted earlier in this blog. Another Sandi-the-vampire story was begun by Smileyfax on FF.net, a very interesting tale called "Liquid Diet." (Moar, plz.) This is a fandom theme that resonates.

Anyway, happy eighth birthday to the nauseating aunts. And to Sandi Griffin's Dracula.

What is it with the tsunami of fanfiction lately? Whatever's causing it, I hope it doesn't stop!

Which is much more interesting than Crow T. Robot's Bram Stoker's The Civil War.

I never understood the attitude that Amy wasn't cool because of her actions during this episode. Even very cool people have the curse of family to deal with... as Daria herself knows. People who think Daria is cool know that she has her less-than-stable father to talk back down to Earth on a regular basis - and then, there's Quinn and her Fashion Borg, always trying to assimiliate her into the Collective of 'normalcy'...

I never understood that.

BG, he didn't say Amy isn't cool. He said "not as cool as was earlier supposed," which I think is true. Until that episode, Amy was seen as pretty much infallible. She was the "cool aunt" who was just like Daria only more experienced--which pretty much meant she was above it all.

Aunt Nauseum set her up as being actually human, and showed that Daria could actually be more mature than she was. The "cool aunt" descended into childish bickering while the "less experienced" teenager called the sisters out on their crap.

So, Amy's still cool. She just stopped exhibiting godlike levels of cool and had to settle for average everyday cool. ;)

Amy's human? Well there goes that story where she conquers the world and abducts Jane for her outer space harem.

When it comes to family, no one is above it all.