All the Grizzly Details 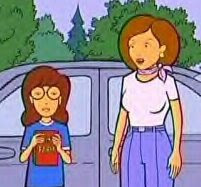 Fifteen years ago today in another universe, a young girl named Daria Morgendorffer vanished on a nature hike at Camp Grizzly. This is her story. And yes yes yes yes yes, I am going to finish the series this year if at all possible.

Brother Grimace discovered an interesting essay about the "Macho Sue" character type, which provoked a lot of thought on my part (and probably for others by the time you read this). See the thread about this topic right here. Jane Lane has her own thoughts on the Macho Sue topic.

Hooray, commitment to Others Pt. 3! Now all you have to do is announce that you're writing the sequel to Gone, and I can die happy.

I won't die until I've actually read them.

(And hopefully not soon after.)

Probably a bad time to say I was drunk and doing drugs while listening to Rush Limbaugh when I wrote all that.