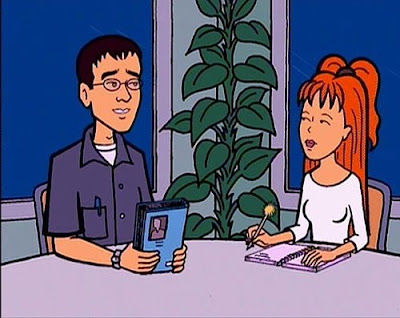 Today is the birthday of NBC and MTV personality Carson Daly, who voiced the character of David Sorenson on Is It Fall Yet? Happy 36th, dude.

The International Committee for Adding Useless Holidays to the Calendar has declared that today is also National Chocolate Eclair Day, but no one wrote down how we are to celebrate it. Alas! Guess you should go have yourself a doughnut.

Off the top of my head, only one Daria fanfic had anything to do with chocolate eclairs. That was this one. Bon appetit.

NEWZ: Doggieboy's turn at the Iron Chef wheel, as he presents three new challenges for the Angst Lord Time-Trials Redux!

The "Second Coming of the New Ideas Thread" was just given a boost by newcomer Trscroggs, who has lots of wild new ideas for Daria fanfiction. Check it out.

Hey! Chocolate! Where the heck is everyone? This is a chocolate day!

They're all off somewhere eating chocolate.

You give me a chocolate eclair and then maybe I'll have something to say. :P