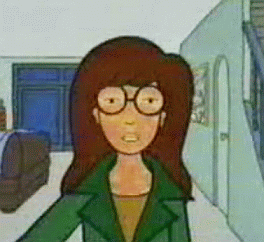 "Ill" premiered 11 years ago today, and Daria starred in the Beavis and Butt-head episode "Sign Here" 16 years ago. Kinda of funny that the two events supposedly took place one year apart, yet were five years apart in real time.

I feel kind of bad that I didn't run around screaming my head off when it was discovered that Daria is finally coming out on DVD. Part of the problem was that we've had so many rumors floating around for years that it was going to happen, but didn't. Plus, the announcement from MTV itself came in the form of an advert on an unrelated DVD set. It leaked out instead of being shouted from MTV's rooftops.

This worries me because it seems to imply that MTV (or someone) has the idea that a boxed set of Daria DVDs won't automatically leap of the shelves. I've clicked over to the Daria section of MTV online, and there's no announcement there about DVDs. In fact (are you sitting down? ready for this?), when I put "daria dvd" into the MTV website search engine, I get this. Notice that THE TOP TWO SPONSORED LINKS ARE FOR UNOFFICIAL COLLECTIONS OF DARIA ON DVD! THEY'RE EVEN DOING A LIQUIDATION SALE! A THIRD UNOFFICIAL SELLER OF DARIA DVDS IS ON THE RIGHT! AND MTV IS PROMOTING THIS ON THEIR OWN WEBSITE! Click here for the screen capture I saved of this.

Is MTV's Legal Department aware of this competition against their own products? Is there some loophole we're not aware of involving ripping off corporations so they either don't know about it or approve of it? Is MTV getting a cut of the profits from the bootleggers? Beats me. This website doesn't earn me a penny. Have I had the wrong idea about copyrights and trademarks all these years? 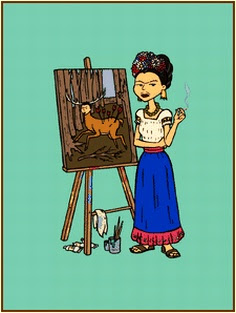 All I want to say is that I will be thrilled to pieces to have my own official Daria DVD set, which is bound to be high quality and have all sorts of fun things on it. It will be wonderful. I'm only sorry it took so long, and sorry the news was delivered in such a low-key way. Thank you, MTV people. I am still curious how bootleggers can make money off your own products ON YOUR OWN WEBSITE. I once worked for a creative company that would have whipped me with razor wire if I had let something like that appear in the magazine I was editing, but perhaps I am being narrow-minded.

Cheers to you. Oh, last notes: today is comic-book graphic-novel artist John Byrne's 59th birthday, thank you for all those marvelous She-Hulk images stamped into my brain that inspired this story, and it is the 102nd anniversary of the birth of Mexican painter Frida Kahlo, memorialized by Spanish-speaker Jane Lane in an alter ego at right. The 2002 movie Frida is well worth watching. And the painting that Jane stands beside is Kahlo's surrealist self-portrait, The Little Deer.

Interesting that this is one of several MTV images that show Jane Lane smoking.

LATE NOTE: Pinkminx has something special for all Trentophiles out there. Check it out.

Those adds are probably auto-generated by an off-site company based on keywords within the content and the website maintainer doesn't have direct control of them.

Kind of like how a couple of medical blogs I follow had a problem with off-site generated ads for various quack treatments. But considering how long this has gone on, I'm surprised that MTV hasn't stepped in before now.

Sorta funny, I thought the blog entry for today would bring more commentary, but it's just as well.

I mean, if TSR had caught me bootlegging their own products and advertising them in the magazine I edited, I would have been made into sausages. I can't get over it.

I remember complaining to MTV specifically about it once. Guess they never did anything about it. :P

You may be right to be cynical, but I'm feeling optimistic because this is the first real development in a long time, and the first indication that MTV may actually give a crap about our show.

I am not so cynical that I would throw away the gift! THANK YOU, MTV!!!