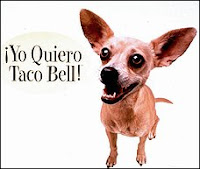 As you will see from this PPMB thread, the chihuahua that took part in those Taco Bell commercials in bygone years, Gidget, has passed on to that Great Kennel in the Sky. She appears at left in one of her late-1990s commercials, popular at the time Daria was on MTV.

This is the very same chihuahua on which the alter ego of Quinn Morgendorffer at right was based. (Look for image #129 in the alter ego flipbook on MTV's Daria website. The caption is: "Yo quiero Taco Bell!"). Not quite sure why Quinn was picked for this, unless it was a popularity issue. Or unless Taco Bell was secretly Quinn's favorite eating place. I could see that.

Alas, poor Gidget, we knew you well. You were a good dog. Rest in peace.


MOAR NEWZ! A few more interesting webpages announcing the 2010 release of Daria on DVD follow. Again, they are interesting because some offer short video clips or images worth viewing, and some are just fun to read because of readers' comments. Enjoy.
Again, Amazon.com has a sign-up sheet for Daria on DVD. Be there or be square.

I really do need to update the "Daria on DVD Activism" section at left. We finally got what we needed.

A new PPMB Iron Chef is up from MDetector5: Weird Jobs (the Fashion Club at Hooters). The art is fun, too.

Labels: gidget the chihuahua, quinn as the taco bell chihuahua

In the immortal words of a KU football lineman who got stuck in a Taco Bell drive up window: "Where's my Chalupa?"