Time for the Dog Days... But Not for DVDaria! The poodle that appeared on Sick, Sad World in the episode "I Loathe a Parade" now appears here to celebrate the beginning of the forty Dog Days of summer. Gave her a peppermint look to go with her shoes.

BREAKING NEWS!
Are all episodes of Daria coming out on DVD at last? It looks that way! It'll be in late 2010, however, and without the music, but we can't afford to be picky. Click on the following links for details. The screen capture at the bottom of this post is lookin' good!
Kafkaesque author Franz Kafka, beloved of Daria so much that she has his picture hanging in her room above her work desk, was born this day 126 years ago. Read The Metamorphosis!

An interesting digression on writing for money vs. writing fanfiction for free appears at Fortress CINCGREEN. It's worth your time to read. 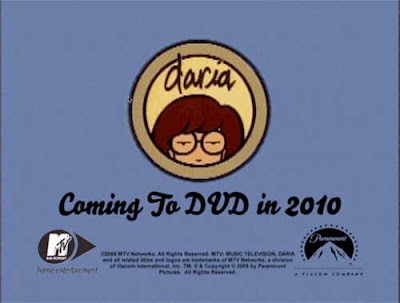 Great news! Shame about the music, there were some cool tunes which matched the actual scenes very well.

I am definitely getting a copy. I hope they add fun stuff about the making of the show and also tell us Andrea's last name, finally.

If they do it like the Mike Judge Collection (though hopefully with the seasons intact), they would have several extras. They could save a lot of money by including past specials...