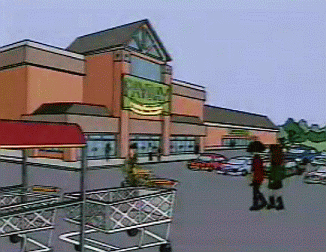 The fourth-season episode "Mart of Darkness" premiered on MTV nine years ago today. Lots of amusing bits in this one, like Tom making the typical guy mistake of eating food when his gf meant to use it as art supplies, Quinn doing the sibling thing and stealing Daria's bootlace, the Immaculate Confection, etc., but the funniest part of all was Quinn trying to hang up on Stacy: "Oh no! Oh, my God! Oh no, accessory emergency. Stacy, I have to go. No, Stacy, it's not you. It's not. It's not! Okay, fine! It is you! [Stacy begins to cry] Bye!" I love that part! We also saw that Daria wears white tube socks, which of course is critical to know.

A few other fandom events of importance took place on this date. Kara Wild's Contrarian's Corner, beloved of fandom as one of the great supersites tirelessly supporting Daria interests, was last updated two years ago today. A subdirectory of this site, DVDaria, continues to be active, thankfully.

An AU version of a minor canon character had her wedding dress completed 73 years ago today. See if you can guess who it is. An original fan-created character died on this day 146 years ago, too. Good luck guessing that one. If you click the links, perform a search for "july 5" to get the answers.

A startling thread appeared on PPMB about two Suicide Girls, Tragique and Viking, cosplaying Daria and Jane. The images run into the R-rated category so no direct link is offered, but you can get there from the PPMB thread. I have no idea why some people didn't like the pictures; they were amazing. The resemblance is not the only startling aspect the pictures have, but that is all we will say about that.

Napalm Kracken has a new work of art for us to enjoy: Daria and Jane Trek On! It might become the start of a series! YES!

Richard Lobinske found an amusing webpage that might be of interest to those writing about the perennial UFO-kidnapee, Artie. Enjoy.

Thanks for the shout-out, TAG. Also, if it means anything, since the TV Shows on DVD announcement, the Television Without Pity "Daria" thread, usually dormant, has been hopping.

Hey, I just wanted to say i read through that thread and I'm glad some people liked our tribute. It's not going to be identical to the characters because we have more body mods. I am a huge Daria fan and we tried our hardest to shoot a playful tribute to an awesome show. I like your blog too by the way.
Tragique.