Happy Fourth of July! Last year I posted a list of Daria fanfics that take place on this day, and you may click over that-a-way to check it out. Does anyone know of any new ones to add to the list? One fan-created character has an interesting connection to Independence Day.

Ms. Li here sings the U.S. national anthem, though I think the image is based on something else, maybe an MTV video. Not sure. Anyone know?

Even though it looks like we'll get Daria on DVD a little over a year from now, I'll leave the links section at left on "Daria-on-DVD activism" intact. You never know...

WE HAVE A WINNER! Disco316 appears to have correctly identified Ms. Li's outfit as similar to that worn by Ginger Spice (Geri Halliwell) of the Spice Girls. The image is more precise than that, however. (Remember what I said a while back about MTV artists often being very particular about the images they imitate?) I believe this alter ego pokes fun at Ginger Spice's appearance on the cover of Playboy Magazine for the May 1998 issue (see below, click on pic to enlarge). Ms. Li merely wears the American version of the Union Jack one-piece Ginger wore. Same shoes and microphone, though. What do you think? 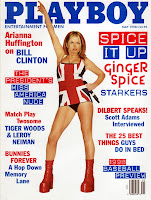 Ginger looks better naked (I would imagine at least heheh)

I certainly hope so!

Ooh, I knew I was right on that one. Even found that exact outfit from the 1997 VMA's!

(Am I that bored that I'm excited about this? Yes!)