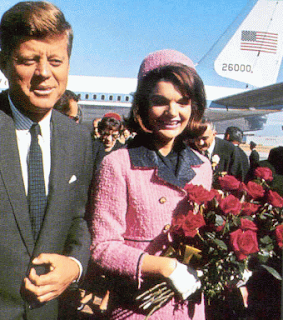 Jacqueline Kennedy Onassis was born 80 years ago today. She was the First Lady when JFK was president (1961 to 1963). Stacy Rowe (at left) models a close duplicate of Jackie's then-famous pink outfit, holding a rose bush for planting.

There's only one teensie little problem, which is that Jackie Kennedy was wearing that famous pink outfit when her husband was assassinated as he sat by her side on November 22, 1963, in Dallas, Texas. When the Kennedys' plane landed at Love Field in Dallas earlier that day, Mrs. Kennedy was given a large bouquet of roses (see picture at right).

In other words, Stacy's alter ego is reallllllly creepy.

Ten years ago today, "Speedtrapped" premiered. I've already gone on and on about Daria's murder attempt during that trip, so no more will be said about it here. If anyone is up to it, the DariaWiki page on this episode could use some work.

Stacy? Do something creepy? Perish the thought!

Well, yeah, but how exactly do you milk the chocolate?

Man, do I have to do EVERYTHING around here?

Get the chocolate and put it in a milking machine. Boom, done.

TAG, that's not the milking machine...

Milking machine, Tux, it's all the same.