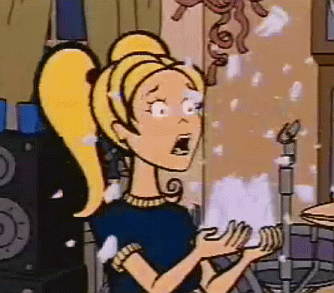 Brittany's crystal bullhorn explodes into a thousand shards, miraculously without injuring Brittany, in the climax of "Groped by an Angel." That episode premiered nine years ago today. Maybe Brittany had a guardian angel of her own. For more on the episode, click here.

If you are for some reason curious about what was being said in this blog a year ago, click here and enjoy.

Because the text tends to overlap left-mounted images using this blog format, I am adding all new fanfiction from today to the blog post from yesterday. Yes, I know this smacks of treason, but it just looks so much nicer and neater that way. Plus it forces readers to see all the goodness that popped out the day before. It's for your own good, trust me.

Okay, forget that reason because I'm going to use bullet points anyway. Let's take a look at what "Groped by an Angel" gave us to play with in the field of fanfiction topics and general discussion.
Your thoughts, please?

What if Quinn had been struck on the head by the light fixture? Mild concussion, scalp lacerations, brain injury, angst. Why hasn't anyone done the appropriate AU for this?

Does a broken collarbone count?

A less sinister explanation for the Brittany/Ashley Amber similarity is that Brittany may strongly resemble her mother, and Steve Taylor married Ashley Amber because she reminds him of his ex-wife. As for their behavior, well, AA may have been the only female role model Brittany's ever had.

I know. Chicks! What can you do. It only makes it worse, of course, that she is right.

You know, if Quinn got hit on the head by that light fixture, she might become a little crazy and start to this she's Cleopatra, like in that one fanfic that was never completed. That would be awesome.

I meant "think" instead of "this" in the past post. I was testing you.