A Holiday to Get Carrie'd Away Over 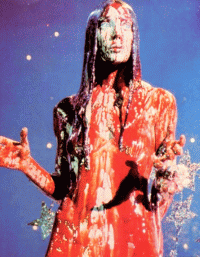 Stacy is on the left in her traditional "Carrie" costume (with obligatory pig's blood), after the climactic scene from the 1976 movie (at right) based on the 1974 Stephen King novel. Makes you wonder what happened a few seconds after Stacy got splashed....

A Guilty Aside: I admit that I really like tracking down the origins of the alter egos that appeared on Daria. Hope you don't mind, but it's terrific fun. Mind game thing.

Today is also the 43rd anniversary of the premiere of the first Star Trek TV episode ever. This allowed Daria to have someone to make fun of (i.e., Trekkies). If you are a Trekkie, don't worry, there's always help available somewhere.

And it is also International Literacy Day, which Daria would always find a way to celebrate by reading a book. Splendid idea. Read a book, why don't you (Carrie is good!), but write your Dead Stacy Rowe Day story first.

Richard Lobinske has once again updated his 2009 Daria Visual Fanworks List! And I have not yet done the same for 2009 fanfic, but it is on my calendar for very soon. Moar 2 com.

BREAKING ART NOOZ: Pinkminx's latest update on "Jane - My Style" is available by link on PPMB. And Her Awesomeness Hershey-chan is back with more 'shipper artwork! Her latest is... real good! (I won't spoil it.)

And then, there are the furries...At present there is no cure. But you can help! Volunteers are waiting to take your call...

i love carrie! since i was a kid. it's cool...it gives me....confisence because i used to be a loser in school. lolz! somehow, i thought of sweeping them all even ima loser

So, when is Psycho Stacy Rowe Day?

Is there a fanfic that gives a particular day as being appropriate for a Psycho Stacy Rowe Day?