One Last Blast from the Past

It's funny to think about it now, but when I began this blog two years ago, I was afraid I would run out of images very quickly. How naïve.

At left, a special image The-N once sent out to those who completed a quiz to show how much like Daria they were, and managed to score right at the top. One of the neater little things The-N had on its site, along with large-size images of Daria and Jane, and huge unique wallpapers.

Garden gnomes! Who doesn't love garden gnomes? I think the image at upper right was from Wildgoose's old site, Hell Is Other People. Was this scene at the Gupty's house? Don't remember where it showed up.

Oh, just a side note: check out the newly expanded Backgrounders webpage for The Head, the clueless nerd who seems to show up everywhere, sometimes twice at the same time. You know Ms. Li's gotta be running a Professor Xavier-type school here with all the mutant time traveling, shape changing, self-duplicating, teleporting kids around this school. My sincere and heartfelt thanks to UU and Pinhead for the images and labor that are slowly transforming the Backgrounders site into a thing of absolute wonder.

Too bad you can't click the image at right and really get Mystik Spiral to show up at your house. This was from an old MTV Daria page. I seem to have a lot of tiny Tank images from all sorts of places.

Where did the Fashion Club like to shop? Just look to the right and find out (another old MTV image for wallpapering). 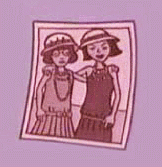 At left, an excellent screen capture from Is It College Yet? showing Daria and Jane as bff's in the 1920s. They're wearing flapper outfits. Good jump-off image for a time-travel tale. This was from CyberDaria, touched up a bit. Funny, when you read the first couple of paragraphs about flappers on Wikipedia, it does remind you of Jane and Daria. Mostly Jane for me, but your mileage may vary.

At right is an alter ego that might not look familiar to you unless you've played the computer game, Daria's Inferno. In the end credits for the game, as information on the game's publisher (Simon & Schuster) is being given, this picture appears. (It is quite large. Click on it.) It is Mr. O'Neill, of course, dressed as the Simon & Schuster logo. He looks more like an older version of the S&S logo from 1961, but even more like the original source of the logo itself. The S&S logo was based upon a French artist's work from 1850: Jean-François Millet's The Sower, which surprises us nowadays as it was once considered a revolutionary work. During Daria's time, Simon & Schuster was the publishing wing of Viacom, which also owned MTV. And there you have it: an alter ego with a longer-than-expected history and meaning.

Left: A rare screen capture of Jane Lane putting on lipstick. I forgot which episode this was in and on which extinct website I found it. Oh, well. The image came from fan artist extraordinaire Pinhead, and my thanks to him for it. Love the shot. It's actually rather big. I touched it up a little.

Last, we have what I think is an image from the Mystik Spiral rock video, "Freakin' Friends," though I am not sure. Kind of evocative, the lighter and psychedelic background and everything.

Enough for tonight, moar tomorrow at some point.

LATE NOTE: I've just discovered that some of the images I posted today and credited to CyberDaria actually came from a different goldmine, the recovered files and images from the old Triste Monde Tragique website (also French). I have so many new images I'm losing track of their origins. My apologies for the mix-up.

Check out the new Daria Time button on the left! :)

"Left: A rare screen capture of Jane Lane putting on lipstick. I forgot which episode this was in and on which extinct website I found it. Oh, well. Love the shot, though. It's actually rather big. I touched it up a little."

Well, see, I have brain damage. I can't be blamed for anything. :)

My apologies, though, to Pinhead. It seems I am the real pinhead here! :D

You fish for compliments!
;)

No, just being realistic. :)

'Funny, when you read the first couple of paragraphs about flappers on Wikipedia, it does remind you of Jane and Daria. Mostly Jane for me, but your mileage may vary.'

"The image came from fan artist extraordinaire Pinhead, and my thanks to him for it."
I will not remind any more of myself! My word upon it!