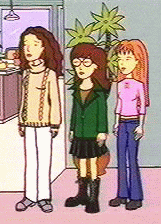 A very weird and potentially useful fanfic plot idea was brought up by Malakite on PPMB. Won't spoil it here, but it might involve time travel....

And I discovered a fan movie for Daria made by the immortal S.C., and perhaps you might like to see it and share the awe. And turn up the volume.