The Way Out WayBack Machine 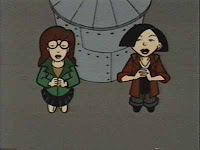 What else can we drag out of the archives... oh, this is interesting. Karine, of CyberDaria, designed some light switch covers like the one at left. Here we see Quinn, and the switch itself appears to be... ZOMG!! Okay, that is just wrong. (Need a shocked-face smiley, have to make one for times like this.) Whew! Better move along and see what else we have. ("Are you happy to see me, or did you just want the lights on?")

A little reminder at upper right that we do indeed see Daria and Jane praying in the traditional Christian manner during "Daria!" (Something to remember in those arguments about religion in cartoons.) At least no one can say Daria was satanic.

Daria and Jane in 3D? Apparently there was something on CyberDaria showing this. Difficult to recover now, except for the image at right.

Thought you might find this item on the left interesting. There was a palmtop computer game called "Dear Daria" some years ago, which you could download for free from several sources. I had a link to it in the Daria Directory, but the game seems to have vanished in the last two years. Dang. However, I did recover something that might turn out to be the game itself, saved on CyberDaria as a RAR file, so we will see. This amusing GIF shows Daria doing the advertising thing for the game.

Okay, I really like this one at right. Not sure if Karine did this, or MTV, or what. Seems to be a combination of two different images from MTV, maybe someone else can set me straight on that. Great 'shipper artwork! Dead solid perfect.

Ever wonder what Helen's American Access Gold Card looked like, the one she always used to bribe Quinn? This image came from an old MTV Daria site, along with a bunch of other iconic Quinn possessions like her gum machine and T-shirt design. They were meant to be tiled together to form a desktop background. The card seems to be an American Express parody. Anyone remember what other kinds of credit cards Helen and Jake used as bribes? Hard to image that. Did the girls just sign their parents' names, or what?

And now that I've mentioned Quinn's T-shirt design, here it is at left. Imagine having a background all tiled up with this image. Hurts my head to think about it, but women like pink, so who knows.

And Quinn's stuffed Triceratops is at right. (Quinn with a stuffed Triceratops? I always thought that was excellent! If I was six years old, I would SO want one.) And that will close this post out. Amazing what you can find when you just look.