No More Foaming at the Mouth for You! 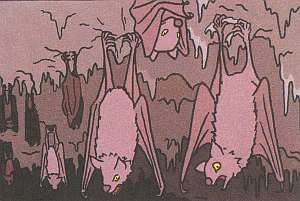 Today is World Rabies Day, established in hopes of eliminating rabies forever (as has pretty much happened to smallpox). Vaccinate your pets! Make the world safe for dog lovers! Yeah, well, cats and bats and other stuff, too, but mostly dogs, 'cause they're our friends. Cats just enslave you to do their bidding and bats drink your blood and the other stuff is just icky. Dogs rule.

Cool how I took the bat postcard from The Daria Diaries and retouched it to get rid of the writing, isn't it? :)

we'll make an artist out of you yet :D