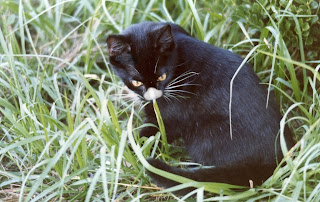 The televised Daria really only mentioned two pets, Sandi's cat Fluffy and Leary, the Yeager's dog. The Daria Database mentions two cats living in the Lane home, Zachary and Taylor. In contrast, fanfiction authors have added many animal companions, such as Opie the Armadillo created by Galen Hardesty or Roger the Mouse by The Angst Guy, or Bump, our featured feline.

What is also fun is how these characters haven't stayed in their home stories, but have been used by other fanfiction authors. Sometimes even combining several, like Brother Grimace's "Paws Force Power Rangers".

More pet characters can be found at the DariaWiki entry.

So give your pet(s) an extra treat today. They deserve it.

My wife and I have thought about getting a dog with the kids gone, but I had a dog once and don't want to do it again. Can't replace a best friend.

Cats like to bite me too much. Dogs are always happy to see you. Dogs for me.