Daria in Any Language Is "Cool"

Let's see what else we can drag out of the archived parts of CyberDaria, the French supersite that went into the Internet's black hole half a decade ago. Lots of interesting flotsam to see while surfing the cyberspace ocean....

First off, who is the guy at left? We have his illustration but I don't recall him. Does anyone here know this guy? (Click on him for a larger image.) He was posted to a flipbook on the MTV Daria site long ago, but the flipbook vanished.

A scene from "Scientific Stuff" (B&B episode with Daria) appears on the upper right, evidently a button you clicked on CyberDaria to show a film clip from that episode.

Here is "Andreax" on the right, an image I don't recall seeing before, though in a funny way it seems familiar. Anyone recall where this pic of Andrea came from, originally? 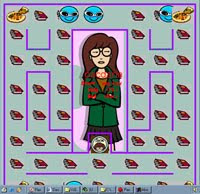 Some kind of PacMan-like videogame pic with Daria.... huh. Not sure if it was an illo or part of something that worked.

Ah, this was interesting. Karine, the webmistress of CyberDaria, designed some useful items for everyone to use. One of these was a CD case cover, at lower right. Nicely done. Part of the artwork was Karine's. Wherever she is now, we can only wish her the best for what she gave us.

More stuff later. I'm in a mood to share unusual things for a while. Not sure how many people are into this, but Internet archaeology is its own reward for the thrill of discovery it provides.
Posted by The Angst Guy at 9/23/2009 02:30:00 PM

"First off, who is the guy at left?"
He is similar to the pirate.

Pirate? What pirate? He's really cool looking, just not sure where the heck he came from.

He looks like the guy that smashed his guitar at the coffee house in "Cafe Disaffecto".