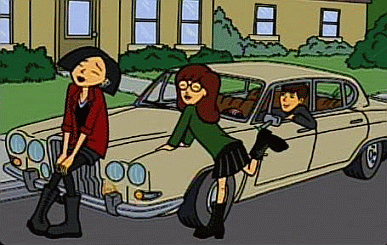 It is today the 101st anniversary of the moment when Émile Cohl released the first-ever animated movie: Fantasmagorie, which debuted in Paris. (More of the Daria-French Connection!) To this little silent cartoon does Daria and all other animation we know and love today owe their very existence. Merci!

This is also the 10th (MINUS ONE DAY!) anniversary of the release of "Jane's Addition," the episode in which we first meet Tom Sloane. The shockwaves are still being felt to this day. The amusing "outtake" image of the participants in The Triangle, goofing off between filming, comes to us from Is It Fall Yet? Yes, it's just a cartoon, but you know how cranky fans get.

P.S. Late Add: Sorry, but Tuesday is the 10th anniversary of "Jane's Addition." I blame drugs for the error.

Labels: cartoon history, is it fall yet?, jane's addition, the kiss, the triangle, tom sloane