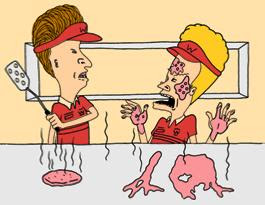 On this day back in Roman times, the Romans got to celebrate Volcanalia, held in honor of the god Vulcan, who oversaw volcanoes, fire, and blacksmithing. At right we see two modern-day acolytes of Vulcan practicing their arcane rituals in Highland, Texas, offering up a meaty sacrifice to their deity. (The blond one is doing it wrong.)

It was a bit queer when Mt. Vesuvius began to show signs of life on this particular day 1,930 years ago, because the Romans living on and around Vesuvius did not know what a volcano was, having never really seen one or thought much about the matter. That was unfortunate, because on the very next day Vesuvius went boom and Pompeii, Herculaneum, and a few other towns in the area simply disappeared. We know better now, as Helen Morgendorffer apparently once rejected the idea of moving to Mount St. Helens, even though Jake said it had her name and so must be a good place to live.

Even if you know all fifty of the United States of America, you probably don't know about the state of Franklin, which came into existence 225 years ago. How that came about is a long story. Today, what was once Franklin is now eastern Tennessee. History is weird, isn't it?

NUZ U KAN YUZ: I've decided to honor those who follow this blog, the dozen of you (love ya!), by adding a Followers gadget to the bottom of the left column. I would love to have more Daria fanz following my rantings and ravings, and you are welcome to join in. Sadly you do not get any money for doing this, nor bonus points or a free clock radio. However, you will have the deep satisfaction of... um, having deep satisfaction. It's worth it. Trust me.

If you are a follower, please drop a note here about what you like about this blog, and I will try to have more of it. Always happy to make you happy. And if you don't like something, let me know that, too.

As a side note, I've subscribed to all the Daria-related blogs I can find, but none of them are currently active except Fortress CINCGREEN, off and on. Dang. Is anyone else interested in starting a Daria fandom blog or fan website, so like we could have drag races and wrestling matches and everything? Never hurts to ask. Another blog would be interesting because it always changes, always has something different. Guess I never got the publishing, writing, and editing urges out of me when I left magazine work.

On a related matter, are there any other animated-series fandom websites? I never checked. Might be interesting to see what they're like and steal borrow something from them.

As far as fan blogs go, Eventually my empty blog will be Daria/ roots of alternative rock/ punk

But that may be quite awhile from now... the Daria stuff will be just observations from rewatching the series (Once the DVD's come out I want to do a reaction to each episode) and how they relate to fanfics... That and I will probably do stuff like slashfic listings (a'la Ranchoth's Slasher Fics) and (positive only) reviews of fanwork (pimping what I love)

Probably won't start until early next year. (I will also put up a page for my own fic so I can include both PPMB and more borderline stuff...)