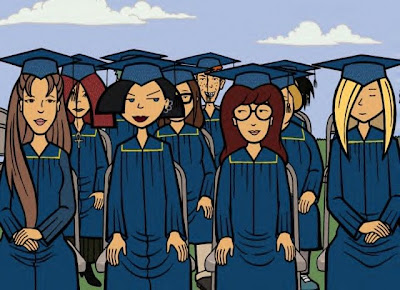 Notice anything unusual about this image?
The deeper that UU and I go into identifying the various characters in Daria, the more interesting certain iconic images become. This is of course Daria and Jane at their graduation in Is It College Yet? However, there is a little more to this picture than immediately meets the eye. Daria and Jane are literally surrounded by three women who were important to the show. The long-haired girl to the left of Jane is (as can best be told) the last winner of any of MTV's contests to have yourself drawn into an episode. She is the last one of us, the fans, to make it into the show, and is thus symbolic of the show's fandom.

The glasses-wearing girl immediately behind Jane, partially hidden by Jane's hair, is a character based upon the Daria show's producer, Cindy Brolsma. Click the link on her name to see proof of this.

And the character to the immediate right of Daria, Burnout Girl, is one based upon the supervising director of the show, Karen Disher.
Get it? Daria and Jane are being shown here within a trinity of women who made the show what it was: the producer, the director, and the fans. There is no possible way this was an accident.

You could even argue that the character known as Dawn, almost hidden by Daria's head, is symbolic of all those on the MTV animation staff who were not around when the show finally ended. The first three iconic individuals, however, count the most.

It's also worth mentioning that the only male seen in the image (and just barely) is Upchuck - arguably the only potentially worthwhile candidate for marriage. He's easily the smartest male member of the case, the one most likely to come into major stacks on his own AND (unlike Tom) is probably more easily prone to feminine manipulation.

Yeah. The show' was never one to make much of the male gender.

"Yeah. The show' was never one to make much of the male gender."

Not that it made too much of the female gender either.. Oh well, humans suck anyway.

This symbolism stuff does make sense though, very clever if intended.

And don't forget that Scarlett is in the picture to: they didn't know it at the time, but she was destined to become the most fan-popular of the backgrounders.