Alter Egos Are Not Just for Daria Folks... 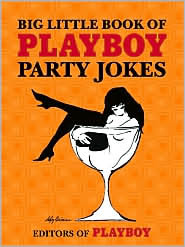 The artwork at left (I use the term "artwork" quite loosely) might puzzle some people. It's obviously Daria's close personal friend, Butt-head, in a woman's black wig, black gloves, and black stockings, sitting naked in a martini glass. Why would anyone draw that? Who would ever drink out of that glass again? And why would I put that image on my blog and gross out the entire readership? (Because I can.) As you futilely try to scrub the offending image out of your brain, you should learn a new thing about it: this is a Beavis and Butt-head alter ego, which works exactly the same as a Daria one.

In this WayBack Machine image from an old MTV B&B site, Butt-head is imitating a femlin. A femlin is a female gremlin character found on the "Party Jokes" pages of Playboy (see book cover at right). This particular pose is one of the most famous ones (among people who drool over Playboy), so much so that it has been sold as a tiny collector's statuette. The femlin even has its own pretentious coffee-table art book. Upchuck would know all about this character, of course. And now, so do you. No, no, don't bother to thank me. It's all a part of educating the Daria fandom, which Lord knows could use it.

Let's see what else we can drag out of the WayBack Machine from MTV websites past.... Have an idea for a new MTV cartoon show? TOO LATE!!! AH HA HA HA HA HA HA HA!!!! Man, that was funny!

No one liked the screensavers that I saved from oblivion, so your punishment is to see Butt-head as a naked woman. I hope you've learned your lesson.

I downloaded the Jane jogging one, it works great. Thanks TAG!

I'm glad I haven't had breakfast yet or I'd have lost it.

Just try NOT to think of Butt-head sitting naked in the glass you're about to drink from.