The Medium Who Was Below Average 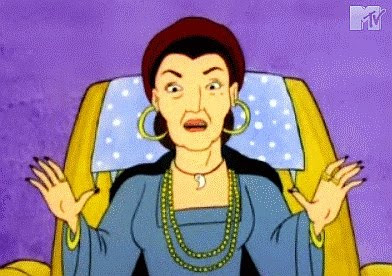 Today is the 178th anniversary of the birth of Madame Blavatsky, a spiritualist who founded theosophy, which is hard to explain so I won't. A medium named Madame Blavatsky (at right) appeared in a 1994 Beavis and Butt-head episode named for her. She turns out to be a fraud, of course, but the episode is quite funny. I wonder if Daria knew about this lady when she lived in Highland.

Cat fancier/hater Erwin Schrödinger might or might not have been born 122 years ago today, yesterday, or tomorrow. He is or is not famous or infamous for devising a means of getting rid of cats using quantum physics, a feat for which he won or did not win the Nobel Prize. To my amazement, no one known has ever written a Daria fanfic that makes use of the Schrödinger's cat experiment. Why not? What's wrong with you people?

Today is also International Youth Day, though I have no idea what good it would do Daria and Jane.

Funny you should mention it...

Schrödinger's cat will make an appearance in chapter 12 of Love is a series of Burning Sensations (assuming I finish ch.11 this week, expect Erwin to show up sometime later this month)

Interestingly, an occultist sorceress named and based off of Blavatsky appears in the Wolfenstein games, the latest installment of which just came out a few days ago.

'Might be a fun backstory connection to Jake's father's presumed war days. "...sure, *I* was cold and hungry, but try telling THAT to 'Mad Dog Morgendorffer,' mister 'I had to charge at a seven-foot-Nazzy-sideshow-freak-with-chain-guns-for -arms with only a smatchet, a luger, and a bellyfull of cold bratwurst for company'! Rot in hell, old man!"

I'm surprised that my characterization of Schrödinger's thought experiment as a means of getting rid of cats did not create an uproar.

Maybe the fandom is so smart they all know about der kitten...