It's Daria in the Movies Day! Yay! 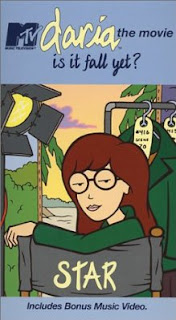 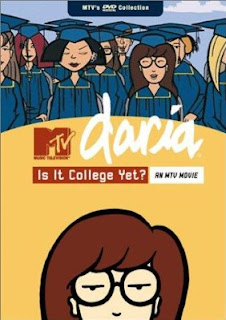 Today is the ninth anniversary of the MTV premiere of Is It Fall Yet? and the seventh anniversary of the DVD release of Is It College Yet? The infamous live Daria-Jane chat was also held online nine years ago today, a special event in which the show's characters (or so we were led to think) answered your questions, even the stupid ones. Those were the good old days, indeed.

Today is also the 126th anniversary of the loudest sound ever known in human history: not a Led Zeppelin concert, but the 1883 final eruption of Krakatoa, which blew an entire island to smithereens. Unfortunately it was an inhabited island. The lesson of Vesuvius is apparently a difficult one to learn: if you live near a mountain that makes noises, leave at once. You would think this was simple, but as recently as the eruption of Mount St. Helens, people still hadn't gotten it down correctly. Doesn't give you a lot of hope for the future, does it?

Don't know if I've mentioned this news story before, but there is a great little article on fictional TV shows that appear within TV shows. Sick, Sad World gets mentioned, but so do a lot of the other shows that would make great background bits in Daria fanfics. Does Upchuck watch Miss Sally's School Yard?

Still looking for Daria-themed wallpaper for your computer? Try the Daria Fan Club.

Brother Grimace, JPAGC, Disco316, Richard Lobinske, Doggieboy, and others have contributed enormous amounts of useful data to DariaWiki of late. Some of the pages new or modified include (in alphabetical order):
Enjoy!

Labels: dariawiki, is it college yet?, is it fall yet?, krakatoa, lots of new and continued fanfiction, the infamous daria and jane chat of august 2000 on mtvdotcom, volcano