This is American Business Women's Day in the U.S., and Linda Griffin is our image person. This is the 60th anniversary of the founding of the American Business Women's Association, and Mrs. Griffin is on the board of the Lawndale Businesswoman's Alliance (per "Gifted"), making her the appropriate choice. Nice blouse color, love that shade of blue. Interesting to listen to her with that slightly deeper, nasal Sandi voice. (The same voice actress, Janie Mertz, did both mother and daughter, as was done with Helen and Quinn and another voice actress.) 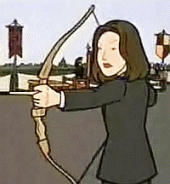 Let's see, what else... oh, today is the anniversary of the mysterious Vela Incident in the South Indian Ocean, wonder how that can be put into a Daria fanfic.

It is also OneWebDay! Hooray! This is supposed to be very important to web freaks like you and me, but every day is special on the Internet. Still, there is a pledge to take. Not sure Daria would do this. It would mean she was taking a position. However, all she does is complain, so maybe she would. Whatever.

I think we've run this into the ground. Take us out of here, Mrs. Griffin.


LAST NOTE: Did you love that tired roll of the eyes that Linda gives in "Gifted" when Helen is going on about "the stick"? Linda is such a babe.

And to think: I spent a LOT of time drawing the wrong FC member's mom ;)