Where the Word "Blog" Came From

Last year at this time was posted a short editorial about 9/11 and how Daria fanfic writers have dealt with it. Nothing new has occurred to me to add to that, so we will remember the moment and move on.

I was intrigued to learn, upon reading A Key to the Terminology of Science-Fiction Fandom, by Donald Franson (1962), that "blog" was originally an SF fan term for the "[m]ythical drink of fans; any potable consisting of an incredible mismatch of ingredients." That sounds about right, doesn't it? That's pretty much what this blog is. Thanks for your help, Graham.

BRKNG NUZ: Medea42 discovered a great article about designer perfumes with great relevance to our fandom. Thank you!

Ranger Thorne has new art out: Quinn the Mage Queen, on PPMB.

OverlordMikey wants to try out a fanfic idea on everyone. See what you think of it. It's got promise!

MOAR AULDE IMAGES: Using the WayBack Machine, I've uncorked another motherload of ancient images and other things. This one is for the French site CyberDaria, so there's a lot of French in it. Plus great images, like a very clear one of Daria's driver's license! Have fun with it, there's a ton of stuff here like screen captures and things taken from the old MTV sites. Cool. 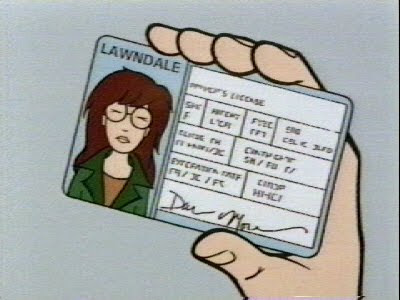 Well, him and you, yeah.